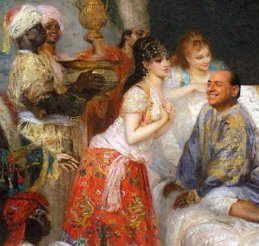 In Italy it is time for the administrative elections. This electoral test has surely, as at beginning Berlusconi suggested, a national value. After the first electoral turn, last week, for Berlusconi things are not so good. In his Milan stronghold, the oppositional candidate, with a clear Communist past, has won the first part of the competition. Berlusconi’s main ally, the xenophobic and Islamophobic Lega Nord, was furious with the result and Berlusconi’s government now has to dance a different Bunga Bunga. The fear that the Left will take control of Milan, the city-symbol of Berlusconism, is enough to convince Berlusconi himself to adopt Lega Nord’s favourite weapon: what I call the ‘Mamma the Turks’ strategy.

To be honest, this strategy is now mainly European, with Right wing European parties capitalizing on it. Berlusconi announced on national television that, if the opposition candidate wins the elections, Milan, but also the rest of Italy, will inevitably be Islamized and mosques, together with gypsy camps, will proliferate.

As an anthropologist, I find the connection that Berlusconi and his team propose between Muslims and Gypsies very interesting. Italy has been rebuked by the European Union for the intolerable condition in which Gypsies (many of whom have been Italian citizens for centuries) are left, and the lack of religious spaces for minorities in the country, with the paradoxical situation that the Catholic Church supports the construction of mosques. But the similarities end there: Gypsies in Italy tend to be Catholic or are Muslims in they own way, and the number of mosques (there are only three ‘official’ ones in all Italy) as well as the ‘unofficial’ garage-based prayer spaces (likely no more than 750 in all Italy) cannot be compared with the larger number of Gypsy camps.

Yet there is one thing that makes Muslims and Gypsies a perfect populist  political weapon: fear. Italians fear both, and more because of the mythology attached to these ‘others’ than for rational reasons. Italians often have little knowledge of Islam, and few have prolonged contact with either Muslims or Gypsies.

Furthermore, both the categories of ‘Muslims’ and ‘Gypsies’ are far too monolithic to represent the varied realities of these communities. Yet the above categories invoke powerful imagery that is both contemporary and folkloric – from the Muslim terrorist (Italy has never suffered terrorist attacks committed by Muslims) to the child-snatching Gypsy woman, from the ‘evil Saracen’ to the Gypsy witch.

The idea of an enemy-within, of an out-group threatening the in-group, is a very powerful cognitive tool that may help Italians to forget the disastrous conditions of their own country. Among the most serious indicators of decline we can mention the decline of purchasing power, with 24.7% of the population, roughly 15 million, risking poverty and social exclusion. Italy today has two million unemployed, some of whom are NEET (Not in Education, Employment or Training).  Moreover, Italians have the lowest average salary in Europe and it has not changed since 1996.

The European Union has set a 2020 target in which 40% of 30-34 year-olds must have a university education or equivalent – Italy currently stands at 19.8% against an EU average of 32.3%. Ideally, the school drop-out rate should be contained below 10%. The current European average is 14.4%. Italy, in 2010, showed a worrying 18.8%, with impressive regional differences: in Sicily more than a quarter of young people leave school with a junior secondary school degree. Socially the situation is no better. As far as information is concerned (mainly controlled by Berlusconi’s family), TV and newspapers remain the main outlet, since Internet usage is below the European average: 59% of Italians, compared to 70% of other Europeans, have access to the Internet. Finally, combining career and family life is difficult for Italian women: only 49% of women return to work after their children reach school age. It is not a surprise that in such a gloomy socioeconomic landscape egoism is rampant: only 34% say they have helped a stranger in the last month.

The fear of Muslims is clearly very convenient since it may distract Italians from the currently quite depressing national reality. Some people will see a woman wearing a headscarf on the street, or some Muslims praying outside of their overcrowded and inadequate prayer rooms (often garages and former shops), and think that Italy is invaded. Easily identifiable, particularly women, Muslims and Islam prove to be an easy target for Italian frustration as the Jews were for a 1930s Germany in decline. Of course, some Italians have a clear idea of how many Muslims live in their country and how many are ‘pious’ or even just practicing. Although precise statistics are not available, I provide below some interesting data:

Italy has a Muslim population of about 825,000 (1.4% of the overall Italian population), and of these, about 160,000 are born Italian. According to Caritas, the majority are Moroccans, Tunisians, Algerians, Egyptians and Senegalese with also a South Asian presence, mainly from Bangladesh. There are only three proper mosques, 400 garage-mosques, 120 Islamic cultural centers and 275 Islamic associations. The are approximately only 300 imams, whom are vastly outnumbered by believers. In Lombardia, where Milan is located, there is no official mosque but there are 123 prayer rooms.

If we compare the above data with other European countries  we may understand how Berlusconi’s words and Lega Nord’s anti-Muslim campaign is not just out of proportion but also intellectually and politically incorrect. Indeed if Italy has a badly served and treated 1.4% of Muslim population, France has  8-9.6%, The Netherlands 5.8%, Denmark 4.2%, Austria 4.2%, Germany 3.7%, the UK 3% and Spain 2.8%.  An important observation I can make, based on my data, is that in Italy many Muslims are not among those whom attend mosques or practice the most. In some places, you may find more Muslims in pubs or discos during the week than at the mosque for daily prayers.

Italy demonstrates a level of intolerance that is far higher than what can be found in other European countries.  Moreover, it is an intolerance that is shown often in everyday life. Yet Muslims in Italy are extremely peaceful, rarely do they protest and no terrorist plot or attack has been carried out against Italy (while an Italian Christian fundamentalist planned attacks against Muslims). Indeed, we may wish to ask why the great majority of Muslims are so tolerant of Italian intolerance.

One of the reasons is the Catholic Church. While Muslims in the world protested against the words of the Pope on Islam, in Italy there was only some relatively quiet discontent (and I can provide other examples). One reason for this patience is that many bishops and priests are often among the few to raise their voices against the discrimination of Muslims in Italy, the first to try to find solutions and generally do not try to convert Muslims. Then there are the immigrant associations, the ordinary people, who, although sometimes a minority, show interest in the lives of Muslims.

However, one of the most relevant reasons, as I came to know, is how these ‘Mediterranean brothers’ have a great respect for Italian history and culture, much of which Tunisians, Algerians, Egyptians, Moroccans, and Libyans shared as part of the ‘Mare Nostrum’, and at the same time a deep understanding of the suffering of Italians, who are seen as being very different from, for instance, other Europeans. These Muslims frequently come from countries which often share similar problems and corruption to what the Italians face. To summarize this understanding with the words of one of my informants who, referring to the Italian sociopolitical reality, observed : ‘you and us are very much the same – all of us live in the same Mediterranean shit’.

Hence, the fear of Islam and Muslims that Berlusconi wishes to induce in order to win the second turn of elections is very misleading, and there could be no one better than Italy’s prime minister to demonstrate it. Indeed Berlusconi has appeared to enjoy multicultural indulgences such as Gaddafi’s Bedouin tradition of “Bunga Bunga” and, among others, the company of young Muslim Moroccans.

One thought on “Berlusconi and the ‘Mamma the Turks!’ strategy”