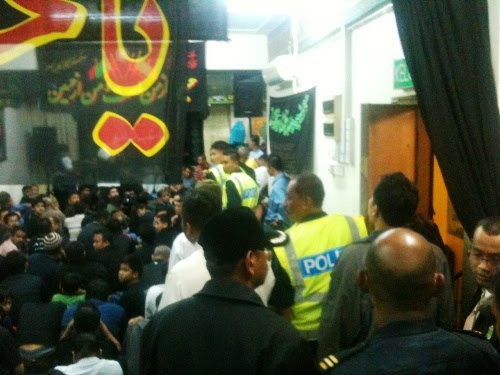 You cannot ban a religion or a ‘religious sect’. You can only persecute people because of their beliefs and practices. Often many forget this simple truth. If banning a religious movement may appear to be a simple administrative act, the real consequence is the oppression of families, devotees and often innocent individuals whose only crime is to have a different vision of the world and spirituality. Often these minorities suffer ostracism, prison or even torture in the name of the ‘security’ and ‘unity’ of the majority. Yet it is these acts of discrimination or, in some countries, overt violence, which often bring a country towards conflict and may even open the door to fanaticism.Malaysia, a country in which Hindu, Taoist and Buddhist temples, Christian churches, Sunni mosques and Bahai associations may sit happily together in one neighborhood, may appear to visitors to be a very tolerant country, in the best tradition of Islam. Furthermore, freedom of religion is enshrined in the Malaysian Constitution, albeit with some limitations and day-to-day controversies to be resolved. However, this task is not easy since Malaysia is a federal state and one with a complex juridical system, including Shariah courts. Recently there have been some controversies which have raised concerns about the traditional tolerance and religious moderation of the country. Some of these have international coverage, while others remain nearly unknown. Among the most quoted have been the Yoga controversy, the attempt to criminalize the use of the word Allah by non-Muslims, and the caning of a Muslim model for alcohol consumption (a punishment which was never executed).

Recently, in particular under the vigilant eye of The Selangor Islamic Religious Department (Jais), a new campaign has been launched in 2011 against Shi’a Islam, which the Malaysian National Fatwa Council has banned since 1996 as a ‘deviant’ sect– a fatwa which surprised the Sunni Muslim world that, albeit generally critical Shi’a Islam, has normally acknowledged it as a part of Islam and as a legitimate legal system (i.e. Jafari school), even within the centre of Sunni intellectual life: al-Azhar. Surprisingly, Shi’a in Saudi Arabia, where Wahhabism is the official expression of Islam, are not fully banned although they are subject to limitations.

Despite the (more political than religious) 1996 fatwa, which banned any form of Shi’a Islam and criminalized its practices, the arrests were sparse and focused on ‘intellectuals’. Yet on the 15th of December 2010, or the 10th night of Muharam, a group of approximately 200 Shiites (105 of them were local adults, a few were from Indonesia, two from Myanmar, and the rest from Pakistan and Iran, including many children) gathered at a building named after Imam Ali ibni Musa ar-Ridha (situated in Seri Gombak, Selangor State, Malaysia) to celebrate, as many Shi’a in the world, the martyrdom of Imam Hussein ibn Ali in Karbala. At around 10:15PM, during the religious speech, enforcement officers from JAIS entered the premises, called off the speech and started to identify and arrest the participants. This has been, in recent years, the most significant arrest of Shi’a Muslims in Malaysia.

Something is changing in the, more or less, tolerant religious landscape of Malaysia if special detention centers, or religious rehabilitation camps, for ‘deviant’ Muslims are planned. Criticism of this new and increasingly hardline approach to what has been identified as  ‘deviant’ Islam has surfaced, not only among more liberal Islamic scholars, but also from the Islamic Party (PAS), which has raised some questions about the actions made by JAIS, with its vice president Tuan Ibrahim Tuan Man joining other independent religious leaders in calling for the Malaysian government to be wiser when dealing with differences of opinions in Islamic thought. Nonetheless, Harussani Zakaria, a cleric from the National Fatwa Council, claimed that Shi’a Islam is a danger to Muslim unity and a threat to the security of the country that should be addressed.

As for the rest of Southeast Asia, the position of the 40,000 (possibly more) Shiites among Malaysia’s 16 million Muslims has never been easy. In particular, when I have discussed the issue of Shi’a Muslims in Malaysia, the problem of ‘security’ and unity of the Malay Muslims has been raised more than once. One of the reasons is that, while foreigners may recognized, Malay Shi’a cannot be distinguished from Malay Sunnis, and many see them as potentially being Iranian spies or traitors, threatening the integrity of the country. Another accusation often leveled at Shi’a Muslims is that they believe Sunni Muslims to be permissible to kill.

Many Muslims in Malaysia (but I can confirm by research experience that this is true also for Singapore) demonstrate a degree of antipathy against Shi’a Muslims and all that is connected with Shi’a culture. Many do not acknowledge Shi’a as Muslims at all.  However, many Malay Muslims also do not know that some of their traditions have been affected by the historical presence, particularly during colonialism, of Shi’a from South Asia. One of the best examples is the so-called Boria. Boria (you can watch an example here) refers to a choral street performance performed annually by a number of troupes. The troupes are composed predominantly of Sunni Malays and it is performed for fun. As Maziar Mozaffari-Falarti has noticed in his study:

What is common to most troupes is that boria is generally performed during the first ten days of Islamic lunar month of Muharram. According to most scholars, however, chiefly Indian Shiite migrants performed historic nineteenth century boria in Malaysia and that the performances were not competitive but religious. Thus these scholars continue that it was these Shiite Indians who first introduced the festival with its religious zeal and pathos into Malaysia and that the local Sunni Malays simply adopted the religious Muharram festival as their own, transforming it into a non-religious practice

In other words, as often in many other religious-profane exchanges, syncretism seems to have succeeded in tolerance where political ideology failed.

Notwithstanding the concern for the repression of a group of people whose only crime is to possess different beliefs to that of the majority population, there are other concerning issues that need to be addressed regarding this recent shift towards a very sectarian and reductionist view of Islam. To illustrate, the increase of actions aimed at limiting Islamic ‘opinions’ and views threaten to diminish the religious debate in the nation (see also the case of the former Perilis mufti, Dr Mohd Asri Zainul Abidin). More and more there is an attempt within certain religious circles, inspired by hardline Wahhabi views, to define and thus impose a unitary, indisputable idea of Islam.

This of course provides power to those in charge of ‘defining’ Islam. In other words, it is not difficult to see in this an attempt to silence the (still very alive) debates of how Islam can be practiced or made part of everyday life. Another aspect of such a move is that whomever is able to define and fossilize ‘real’ Islam in Malaysia will be also able to decide whom is Muslim and whom is not (Takfir).  This would have great political implications in Malaysia and it is not entirely absurd to read the current increase in hardline positions and actions as the first steps towards a grimmer reality. As often happens, what appears uniquely religious reveals, to attentive eyes, political dynamics. It is not a surprise that the Malaysian political world has observed these mass arrests with doubts and questions and noted, as Home Minister Hishammuddin Hussein did, that Shiites did not pose a threat to national security. Yet action against Shi’a adherents has strong popular support and may be beneficial to some hardliners within the perilous political-religious arena that exists in Malaysia, where dynamics move beyond simple secularism versus religion to include many in-betweens and factions.

However, there is another concern that is perhaps not immediately perceived by those involved and the politicians. The recent actions against the Malaysian Shi’a, and the wide support it receives from some sectors of the Muslim Malay population, reinforce the idea of a monolithic Islam; an Islam in black and white, where some hold the “truth” while others are wrong, evil and therefore the enemy. Creating such a dualistic discourse and spreading it within the Muslim community facilitates a rhetoric of takfir that may eventually go beyond the intention of the most hardline clerics, and ultimately, beyond control.

We do not need to look very far from Southeast Asia to observe what, step by step, year by year, a very similar process to that currently taking place in Malaysia brought a country to: look at today’s Pakistan. Of course, Malaysia is a very different country to Pakistan, but the dynamics that brought Pakistan to its current terrible reality do come from the progressive formation of a rhetoric of takfir. Malaysia, its leaders and citizens have to ask themselves where the boundaries are before something they believed to control may turn into an uncontrollable, and quite possibly bloodthirsty, monster.

One thought on “The dangerous crypto-intolerance of tolerant Malaysia: the case of Shi’a Islam”