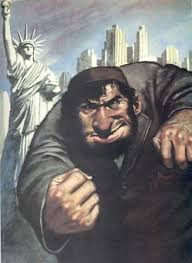 Here is the work of an unknown Italian artist, representing a Muslim and his hate for our civilization….No, oops, sorry…it is not a Muslim, it is a Jew. Well, to correct the mistake, this is an unknown Italian artist in 1941 representing the Jewish domination of America, in particular New York City, recognizable here by the Statue of Liberty and the New York City skyline. You can see this anti-Semitic wartime poster at the Florida Holocaust Museum. Today in Italy, the traditional fascist hatred of the Jew is increasingly substituted by a hatred of Muslims, all of them, children, women and men. Today Muslims in Italy are not so differently represented as their Semitic brothers were during the time of the Fascio and the Eia Eia alala.

To be a Muslim and live in Italy, particularly in the North of the country, politically dominated by the far-right parties Lega Nord (North League, a secessionist party) and Alleanza Nazionale (National Alliance, the bigger post-fascist party), is not just difficult, it is a nightmare. Recently discrimination against the Italian Muslims as well as the immigrants has risen to an unacceptable level for a European country subscribing to, and strongly supporting, the European Convention for Human Rights. I have to admit that if any other European country, such as France, the UK or Germany, would dare to discriminate against their Muslim population as Italy is currently doing, they would face a political as well as social backlash.

Many are the examples of negative attitudes of Italians towards Islam and Muslims in general. One of the best voices to represent such phobia is surely the late Oriana Fallaci, very much a product of that vociferous populism of religious and cultural hatred which the new fascist movement, Lega Nord is today, trying to engender among Italians. I have discussed Oriana’s hysterical fear of Islam in another post. Yet since the case of the Mosque and Islamic centre planned for Colle di Val d’Elsa, near Siena, other cases have seen Italian politicians and ordinary people crying, in the melodramatic style characteristic of certain genres of Italian drama, ‘Mamma li Turchi’ (‘Mother the Turks are coming’).

Of course, in the country of the Mortadella, Parma Ham and spice sausages, the protests against Muslims have often seen pigs (both living and dead) paraded, in the hope that the ‘contamination’, like garlic for vampires, would keep the Mohammedans, or Islamists (as Italians insist on calling Muslims) away. Therefore, if in Colle Val d’Elsa, locals pelted Muslims with sausages and dumped a severed pig’s head at the site, in Bologna, a former minister of the Italian republic, Mariella Mazzetto, has organised a pig parade, which succeeded in convincing Bologna Mayor Sergio Cofferati, a former communist leader of the most powerful trade unions, to stop the construction of the mosque.

Despite the protests of some Italians, who are disgusted by the level of discrimination that Muslims suffer in the attempt to respect their faith, local councils and right-wing Mayors, as well as conservative sections of the Catholic Church, continue their crusade against a majority of ordinary, law-abiding and hard working Italian Muslims. Hence, we can read in the article published by AKI – Adnkronos International ­

Bepi Zambon, former tennis champion and owner of the exclusive Tennis Club Zambon has allocated two courts for local Muslims to worship on – one for men and the other for women. But on Wednesday, the Muslim festival of sacrifice Eid al-Adha, shortly after 300 Muslims had arrived at the tennis club for prayers, local traffic wardens and firemen showed up, as well as an anti-terror police officer. They began rigorously inspecting parked cars and fire exits at the club and asking for documents, on strict instructions to write up any infractions and issue fines mercilessly.
The traffic wardens had been sent to the tennis club by anti-immigrant Northern League politician and deputy mayor of Treviso, Giancarlo Gentilini. Three years ago he invoked a 1975 public order law and ordered police to arrest women wearing the Islamic burqa in Treviso. […]The tennis courts are currently the only prayer area for Muslims in Treviso. They last month lost a prayer space allocated them inside a local church in the Ponzano district of Treviso after this sparked controversy, and were evicted from their mosque in Villorba in the province of Treviso.

Today we can read in the Italian newspaper, La Republica, that, though no crime has being discover, the prayer area has been closed, and Muslim forced to prayer in the street, where they, of course, can be arrested for illegal congregation (one of the many Mussolini’s laws still valid in the republic).

Not only are Muslims in Italy disrupted in their efforts to establish official (hence controlled and approved by the councils and the state) congregational spaces, but they are also demonised and misrepresented in a hardly believable way. Recently, Giancarlo Gentilini, deputy mayor of Treviso and staunch anti-Muslim activist, has said that Muslims, are a ‘cancer which must be eradicated before they start to spread’. Political posters and leaflets often speak of ‘Islamic invasion’ in Italy, of a Europe being controlled by an Islamic lobby, or Muslim women, all of them, as passive creatures oppressed by an archaic and primitive religion, Islam. It is very difficult, in Italy, to find any balanced and informed discussion about Islam and Muslims. Like in a tragic opera, everything should be sung at the top of one’s voice, with vibrato and tragic emphasis. Muslims living in Italy (often called Mohammedans, Islamists, Saladins, or, even when not specifically originally from those countries, Turks, and Moroccans) have to read, often everyday, misleading information about their religion and themselves.

Of course, when there is a crime, they are the first to be suspected, and I am speaking of ordinary crimes. For instance, recently, a woman was kidnapped, and the Italian mass media reported that the woman was kidnapped by an alleged ‘Moroccan gang’. In reality the kidnapping, which ended in tragedy, was very much, as usual, the work of an Italian. This was not the first time, nor will it be the last, that horrific crimes would be attributed to Muslims, generally called Marocchini. Another example is the so-called ‘strage d’Erba’ in which an entire part of the family was killed and a young child found with his throat cut. Immediately, the husband and father of the boy was accused: he was a Muslim Tunisian, and some investigators suggested that ‘he has killed as Muslims kill’. Again the reality was different, and the culprits were the very much Catholic neighbours. Even in the case of the English Erasmus student killed in Perugia, Meredith, Muslims and Arabs were accused of the murder; indeed, if there is a knife and a slit throat, who other may it be?

Finally, one of the most common accusations against Moroccans and Muslims in general in Italy is that they are criminals, particularly rapists. It is interesting to observe recent Istat statistics that have finally revealed that behind this myth there was a shocking reality, 90% of rapes have been committed by Italians. If you are an Italian woman, the highest risk to you would come from a member of your family, a boyfriend or just a friend, since only 6% of all rapes are committed by an aggressor unknown to the victim. Of all rapes 3% may be attributed to ‘foreigners’, with less than 0.50% to a North Africans (who may be or not Muslim). So, the Italian chimeria that Muslims systematically are raping Italian girls remains another urban Muslimphobic legend.

Stereotypes about Arabs and Muslims, which as ever existed in Italy, are today becoming what for instance Langmuir defines in his article chimerias. They are something more dangerous than mere stereotypes since chimerias are based on fables. Fables go beyond stereotypes since they represent the collective fear of ‘others’ rather than a simplification of characteristics which have a kernel of truth (i.e. Italians are Mafiosi – it is a generalisation of a particular truth: some Italians are). The majority of Italians are neither fascist nor racist, yet a great majority holds denigratory opinions about both Muslims and Islam based on chimerias. The reason behind this is education.

Not only do Italians not receive any education about Islam, other than the official one thought by Catholic priests in the schools and that offered by the mass media, but also they rarely will have an occasion to meet a Muslim, because of the statistical facts that I will discuss later. Yet they are exposed, however, to another aspect of education which the anthropologist Gregory Bateson has named Deutero-learning, or in other words, learning to learn. Bateson has suggested that people, though repetition of particular information or experiences, learn to recognise characteristic patterns of conditioning in different situations involving themselves and others, and then they learn to adapt their own behaviour as a response to those patterns.

In other words, Italians today (but we can extend this to other western countries) because of the continuous repetition of chimerias about Muslims (as happened during the 1930s and 1940s about the Jews) are learning to recognise this characteristic pattern of conditioning in the different situations in which they find themselves, and so they are adapting their own behaviour towards the real Muslims. Indeed, the majority of Italians do not know anything about Islam or Muslims, they have even never met one, leave aside spoken to one. However, they have learned to learn about these people. Here begins the exaggerated and hysterical paranoia about Muslims and Islam, which, nonetheless, appears totally real to them, as per the Deutero-learning.

Indeed, if we leave the statistics to speak for themselves, we can observe that many of the ‘facts’ that Italians believe about Muslims in Italy are inexistent beyond their chimeric imagination. Politicians and many ordinary people say Muslims are invading Italy and that they would take control of the nation to make Italians pray as Muslims do. But how many Muslims live in Italy? Try to ask any Italian, and the numbers may go wild. The statistic reality is very different. Italians number 57,440,000, while all religious minorities (i.e. non-Catholics) are only 2,600,000, which means 4.52% of the entire population. Muslims, although they are 33% of the non-Catholic religions, are only 1.49% of all the Italian population, and 10,000 Muslims of this 1.49% are actually Italian born.

Compare this 1.49% with the rest of Europe and the US, and we can laugh together at the Italian idea of Saladin taking over the Cupolone (i.e. Saint Peter’s in Rome).

46 thoughts on ““Mamma li Turchi!!”, Italy and the Saladin Syndrome”